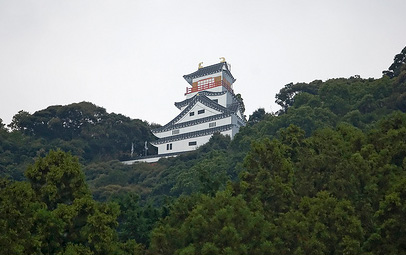 A trick played by Toyotomi Hideyoshi while he was unifying Japan was the construction of a fake castle. Legend has it that once when his army moved into an enemy territory he ordered the construction of a fake castle. The enemy was so impressed with how fast the castle had been constructed they feared certain defeat at such a well organized opponent so they surrendered to Hideyoshi.

To see the other side of this castle, visit Flickr.