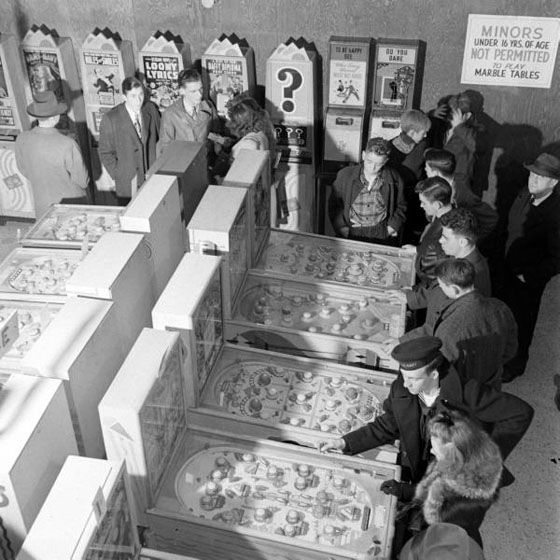 This rather extensive piece ran in Billboard Magazine’s 1943 Summer Special, a full four years before the advent of the electromechanical flipper:

Pinball is a modern game developed from an ancient idea known for many years as bagatelle. The word pinball was probably first coined by a Kentucky circuit court and used in Kentucky newspapers; it was first used in an unabridged dictionary in 1940.

There is a legend that bagatelle antedates bowling, billiards and marbles by many centuries. Some even say that the idea must have originated with ancient soothsayers who made a practice of throwing round stones up the sides of steep hills, basing their prognostications on where they rolled back. Then someone selected a hill with a few natural holes or pockets€”and the idea of bagatelle was born.

It is easy, of course, to imagine the gradual development of bowling and pitch-in-the-hole marble games from these humble beginnings, but history itself leaves a gap in the development of bagatelle…

Fill in the juicy gaps for yourself – read the Billboard Magazine article in its entirety via the Google books archive. Really is quite an exhaustive study.