Pinball pops up in the background on TV and in movies from time to time, but passive forms of entertainment on the screen are, for me, more of a Fall/Winter thing. Come Spring/Summer I find myself outside reading, which is what got me to thinking… Where in modern literature has pinball reared it’s head? Or backbox, in this case =P 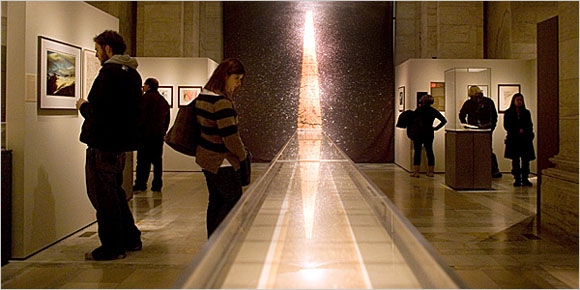 Recently was reading a review of Jack Kerouac’s unedited On the Road scroll, published for the first time in ’07, and came across this excerpt, “On the sidewalk characters swarmed. Everybody was looking at everybody else. It was the end of the continent no more land. Somebody had tipped America like a pinball machine and all the goofballs had come rolling to LA in the southwest corner. I cried for all of us. There was no end to the American sadness and the American madness. Someday we’ll all start laughing and roll on the ground when we realize how funny it’s been. Until then there is a lugubrious seriousness I love in all of this.”
– 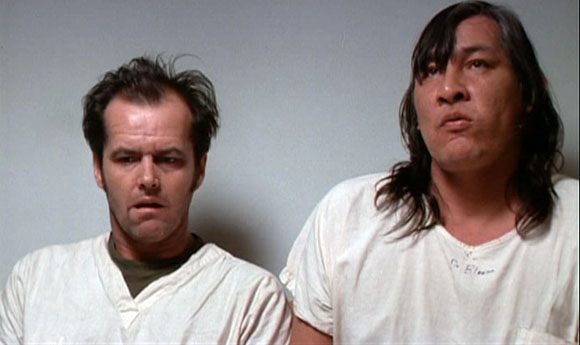 The Kerouac quote immediately reminded me of Ken Kesey’s reference in One Flew Over the Cuckoo’s Nest… Chief trying to reason with McMurphy in regards to his relations with Nurse Ratched, how it might keep him out of shock therapy, and his reply(page 250): “I tried to talk him into playing along with her so’s to get out of the treatments, but he just laughed and told me Hell, all they was doin’ was chargin’ his battery for him, free for nothing. ‘When I get out of here the first woman that takes on ol’ Red McMurphy the ten-thousand watt psychopath, she’s gonna light up like a pinball machine and pay off in silver dollars! No I ain’t scared of their little battery charger.'”
–

Then there’s ulillillia – the video game stunt man. Probably most well known
for his series of youtube videos.
Dude wrote a book recently, and though I haven’t read it yet, did come across this clipping:

A minute-long time lapse occurs where each second is 24 minutes. Knuckles remains inside his house at all times. The humans eat for a half second in bed then play Parcheesi and Uno on a table appearing in the house’s center. Three small, fancy, cushioned, yellow (FFF0D020) chairs are around the table 120* apart. Ivan takes the northwest chair, Tu the east, and Tyler the southwest. The two-feet-in-diameter table has a fancy frosted glass top. Parcheesi lasts for three seconds. Uno lasts five seconds where Tyler is once seen with almost 20 cards.

The humans read a book for 1.5 seconds and go to sleep. The light dims to 25 lumens, moving to the northwest corner and remains for 22 seconds. It returns to the center position and brightens to the original 1200 lumens. Breakfast is served, taking a half second, then the humans play Yahtzee for two seconds. Tyler plays a pinball game until lunch in the north center area using a pinball machine involving a cross-country driving theme. Ivan and Tu play checkers for one second and four chess games for three. They watch TV for six seconds then eat lunch for a half second. Tyler returns to his pinball game for four seconds. His last game takes two
seconds where he gets an extreme score.

Ivan and Tu read their books for two seconds. They build a clone of the Eiffel Tower eight feet tall in seven seconds using the table as a stepping stool and small Legos only of the rectangular type. Odd sizes like 3×1, 5×2 are also used. When Tyler finishes his big game, scoring 17 billion points, he helps build. They watch three movies in 4.5 seconds, the second in grayscale (an old movie). Another game of Uno uses up the last 1.5 seconds.

Throughout this, Knuckles draws a main-event waveform once every two seconds and doesn’t move from his spot. They reach 31.8 dB for the amplitude slowly increasing linearly (by the number) and the scale is extends to 35 at the edge of the page at the start. The time is based on that at the end of the time lapse.”
– Buddy of mine by the name of Mr. Handler put me onto Haruki Murakami’s Pinball, 1973

There is precious little you can gain from a pinball machine. Only some lights that convert to a score count. On the other hand, there is a great deal to lose. All the coppers you’d ever need to erect statues of every president in history (provided, of course, you thought well enough to erect a statue of Richard M. Nixon), not to mention a lot of valuable and nonreturnable time.

While you’re playing yourself out in lonesome dissipation in front of a pinball machine, someone else might be reading through Proust. Still another might be engaged in heavy petting with a girlfriend at a drive-in theater showing of Paths of Courage. The one could well become a writer, witness to the age; the others, a happily married couple.

Pinball machines, however, won’t lead you anywhere. Just the replay light. Replay, replay, replay …. So persistently you’d swear a game of pinball aspired to perpetuity.
We ourselves will never know much of perpetuity. But we can get a faint inkling of what it’s like.

The object of pinball lies not in self-expression, but in self-revolt. Not in the expansion of the ego, but in its compression. Not in extractive analysis, but in inclusive subsumption.

So if it’s self-expression or ego-expansion or analysis you’re after, you’ll only be subjected to the merciless retaliation of the tilt lamps.

Have a nice game.

Found on the cover of some random novel from 1962: 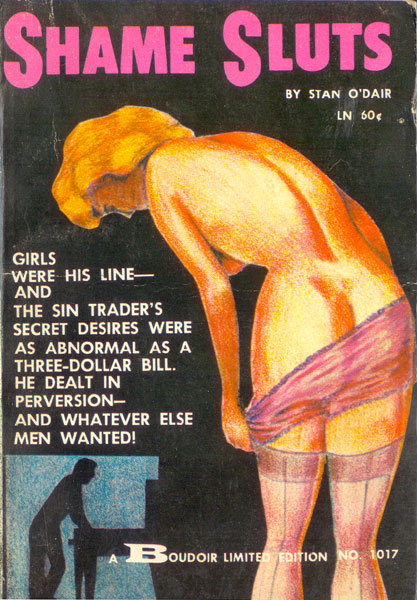 Only review I’ve found of the book, “Stan O’Dair’s Shame Sluts, showing a subtle appreciation for the female form about equal to that of a 3rd grader.”

Have the sense that the cover’s as good as this one’s gonna get.
–

Always on the lookout for more instances of this particular piece of Americana cropping up in written pop-culture, images of one of our favorite past times as it occurs in the wilds of the writer’s imagination.

There’s got to be more out there, right?
– 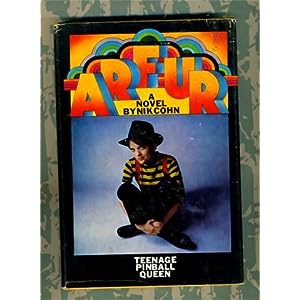 Johnny O says, “Here is one which one web site claims to have been an inspiration for The Who’s Pinball Wizard”

Don C adds, “From what I remember about Tommy, the pinball references were all after thoughts by Pete. He was trying to sell the concept and threw the pinball stuff in because he knew the manager was in to it. He always called Pinball Wizard a throw away song, and tied the concept together by adding a few subtle pinball references in a couple of other tunes. The liner notes on the remastered CD talks about it in detail.”

Johnny O, “I’ve heard/read the same. The guy that wrote the book is considered one of the legendary rock journalists so there could be a connection from book to manager to song. It might become apparent from reading the book.”

Author of Arfur Nik Cohn’s wikipedia page says, “When reviewing a rough mix of The Who’s rock opera Tommy, he told the group members that the album was less than spectacular. Knowing that Cohn was a fan of pinball, Pete Townshend suggested that the album’s deaf, dumb, and blind title character could also be an exceptional pinball player. Cohn’s opinion of the album immediately improved, and Townshend subsequently wrote “Pinball Wizard” to be added to the album.”

Add on in the comments, please!