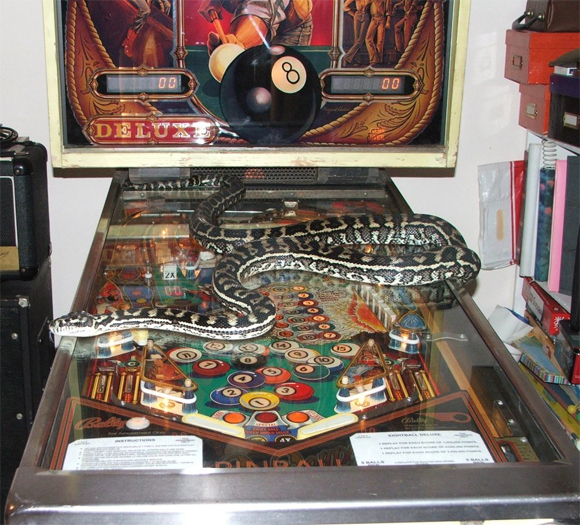 Kotaku reports: Here’s the deal about pinball: It’s not such an innocent game.

In fact, for more than three decades, it was illegal in much of America. From Los Angeles, to Chicago, to New York City, police “pinball squads” swept through gaming halls and gambling dens, confiscating thousands of machines in a series of Prohibition-style raids. The reason: It was thought to be a mob-run racket that was a game of chance, and not skill, and therefore gambling.

But outlawing pinball didn’t cause it to disappear. Rather, it went underground, surviving behind closed doors in seedy joints in Harlem and the Village, and making regular appearances in movies and TV shows. It is these appearances that cemented its image as the baddest game in town. For decades, pinball served as an efficient way for directors to convey to an audience that a character was a roughneck, an outlaw, and generally up to no good. Confused as to whether the Fonz is really a rebel? That pinball machine he’s playing should clear things up. As Sideshow Bob said in The Simpsons (episode 137: “Sideshow Bob’s Last Gleaming”), referencing the evils of television: “My foolish capering destroyed more young minds then syphilis and pinball combined.”

And once you start looking for pinball machines in movies, you notice them everywhere-spreading their youth-corrupting seeds of outlawerry and rebellion.

Check out which machines Kotaku found in film!